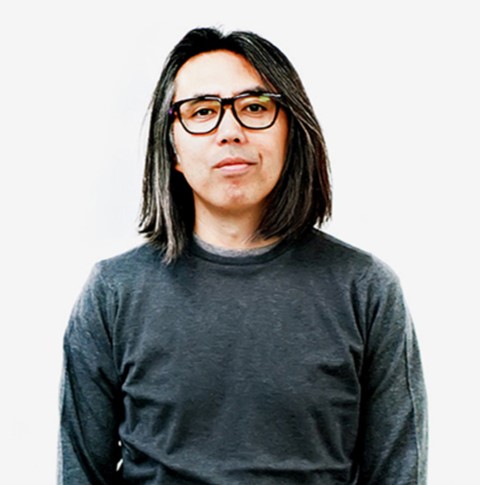 The Fragment designer helped bring hip-hop to Japan, mentored Kanye and Virgil, and quite possibly invented the idea of retro shoes. And he’s not stopping any time soon.

In January, everyone at Paris Fashion Week had something to say about Virgil Abloh’s claim that streetwear was dead, but only one of these comments stuck with me: “As long as Hiroshi Fujiwara is alive,” one fashion CEO told me, “streetwear is alive as well.”

Six months later, when I meet Fujiwara for tea in Tokyo’s Roppongi neighborhood, the founder of Japan’s original streetwear label, Good Enough, is unencumbered by the achievements and associations which inspire such hyperbole. His outfit is autobiographical, but not at all nostalgic: His eyeglasses, framed by shoulder-length curtains of black-and-silver hair, are Oakleys, and his shoes are Nike Air Jordan 3s. Both feature Fragment’s distinctive twin-lightning bolt logo.

“They always want the logo,” Fujiwara says of his collaborators, which include iconic brands ranging from Levi’s to Louis Vuitton. “You know, for my signature.”

What these collaborators are really after, I suspect, is Fujiwara’s boundless aura of cool. Then there’s the fact that he speaks English well enough to develop real friendships with American and European designers, who so often fall in love with Japan and so rarely bother to learn its language. Even my offer to conduct our interview in Japanese is rebuffed, and when I ask Fujiwara to wait a moment while I find the questions I’ve prepared, he tells me not to bother.

Fujiwara, who is 56, spends much of our conversation playing down his influence—he isn’t interested in trading on his past or his reputation, which have made him “the godfather of all the young, promising designers today,” according to Colette’s Sarah Andelman. He tells me, for example, that he wasn’t Japan’s first hip-hop DJ, as many have claimed, though his 1982 trip to New York, and the rap records it yielded, surely made him among the first DJs in his country.

“My friend told me there’s hip-hop going on in New York,” he says, neglecting to mention that this friend was Malcolm McLaren, the punk impresario who was then Vivienne Westwood’s partner. “So I went to New York to see what’s going on.”

He also denies credit for bringing the Stüssy brand to Japan in the 1980s, which is especially strange since Shawn Stussy himself says otherwise. And yet, however charming such modesty may seem in our age of clout-chasing influencers, the vastness of Fujiwara’s influence on our culture has already been measured by his peers. The artist Takashi Murakami, for example, has called him “a cultural leader in Japan,” and predicts that his influence will continue for generations due to the number of artists he’s helped discover. And in 2003, when the director Sofia Coppola released her second feature film, Lost in Translation, it featured a cameo appearance by Fujiwara, who can be seen hanging out at a Tokyo nightclub.

Fujiwara says the cameo came about because of his friendship with Coppola, but it’s hard to imagine the director failed to understand what it signaled about her understanding of Japanese culture. Fujiwara had, by then, penned the supremely influential magazine column “Last Orgy,” which debuted in 1987 and made a superfan out of Tomoaki Nagao, who was rechristened Nigo, meaning “number two,” after a stint as Fujiwara’s assistant; in 1990, Fujiwara started the influential streetwear label Good Enough, which inspired Nigo to start his own highly influential clothing line, A Bathing Ape, in 1993; that same year, Fujiwara opened his shop Ready Made, which soon became the epicenter of the Harajuku scene by focusing almost exclusively on collaborations. With brands like Undercover, Neighborhood, and A Bathing Ape exploding, Fujiwara says he “wanted to do a collaboration-only store, because at that time collaboration wasn’t really popular at all.”

It soon became extremely popular, like everything Fujiwara touches. But that wasn’t the point, so on December 31, 1999, he closed down the most influential shop in what was then the fashion world’s most influential neighborhood. With his next venture, Fragment, he took his collaboration concept to the next level by creating a company that doesn’t actually make anything at all.

“I didn’t want to hire many people and I didn’t want to have any stock or anything to sell,” Fujiwara says. “I was thinking about the way the music industry works, with points and percentages—so if I work with Undercover, I don’t do anything, but give me a little percentage, and you sell everything.”

This way of doing business proved to be a natural fit for Fujiwara, who has an almost supernatural knack for meeting the right people at the right time. As a result, he became friendly with both Kim Jones and Virgil Abloh before either were well-known designers, and his Fragment Design portfolio includes work for clients as unlikely as Eric Clapton (a personal friend) and Pokémon (a job Fujiwara turned down at first, then reconsidered after a friend pointed out how much Pikachu’s lightning bolts resembled the Fragment logo).

More ambitious still are Fujiwara’s legendary pop-up stores, which have been staged in actual parking lots and swimming pools, and, most recently, built to resemble a typical Japanese convenience store. Recently, when I visited the Conveni, which is located in the basement of what was once Tokyo’s Sony Building, I learned that the concept extended all the way down to the packaging; the hooded sweatshirt I bought came in a cereal box, while the t-shirts came rolled up and stuffed into milk cartons or juice bottles.Most Popular

These borderline avant-garde projects sit atop a solid foundation, which is built up around Fujiwara’s massive string of successes with his most enduring partner: Nike. It all began with consulting work for Nike Japan, in the late 1990s, when Fujiwara was one of a few designers tasked with creating limited-edition Japan exclusives—a practice that eventually spawned the very idea of a market for retro shoes.

“At that time, they didn’t care about their old archive at all, they just wanted to do new things only,” Fujiwara says. “I was asking Nike Japan: ‘I want to bring back the Dunk or the Air Force 1, and they didn’t even know what the Dunk was.”

This, Fujiwara says, is part of an ongoing dialectic between Japanese consumers and great American companies. Denim, khaki, and military-style clothing, along with sneakers, have all had major revivals that started in Japan, Fujiwara tells me, because “people in America make great things, but quickly forget how great they are.”

Fujiwara’s work for Nike Japan caught the attention of Mark Parker, who was then the president of its parent company. Parker, who later became Nike’s third CEO, flew to Tokyo to ask Fujiwara what ideas he had for the company’s global ambitions. The vision he described to Parker became, in 2002, what is now Nike’s highest-caliber R&D team, consisting of Hiroshi Fujiwara, Tinker Hatfield, and Mark Parker—or, to sneakerheads, HTM. Aside from any number of legendary drops throughout the years, HTM has also served as an incubator for testing out new materials like those used for Nike’s Flyknit shoes.

In the years since, Fujiwara has released dozens of sneakers under both the HTM banner and the Fragment Designs label. Among these is the legendary Fragment Air Jordan 1, which reimagined the original Jordan sneaker in blue rather than red, with a Fragment logo tucked away neatly beneath Nike’s signature swoosh. When the shoe was released at Fujiwara’s POOL Aoyama pop-up store in 2014, more than two thousand people lined up to try and buy a pair.

Parker isn’t the only high-profile sneaker impresario to go looking for Fujiwara in Tokyo. Just over a decade ago, when Kanye West decamped to Tokyo with Virgil Abloh and Don C. for several months, the rapper tracked Fujiwara down on the streets of Harajuku. Fujiwara had no idea who he was.

“I was walking down the street and he asked me: ‘Are you Hiroshi?’ And I said yes,” Fujiwara says. “He said: ‘I’m Kanye.’”Most Popular

While scrolling through Instagram for photos of the encounter, Fujiwara recalls drinking coffee with Kanye and talking about their mutual love of Christian Dior. He was “sweet,” Fujiwara says, and filled with passion about the world of design. He won’t speculate on what kind of president Kanye might make, and in fact seems rather confused about the fact that anyone, it seems, can run for president in America. But Fujiwara, who turns down many more collaborations than he accepts, says he’d be happy to work with Kanye if the rapper ever came looking for him again.

Finally, Fujiwara finds a photo of himself seated at a table with Kanye and Virgil, and leans over to show me. He has no idea who took it or how it ended up on Instagram, he says, but that actually isn’t unusual. Aside from being a celebrity in Japan, his penchant for wearing prototype Nikes has made him an object of great interest for Tokyo’s sneakerhead paparazzi. In April, when he wore a pair of Fragment Air Jordan 3s to a conference in Hong Kong, fans were crestfallen when he revealed they probably wouldn’t be produced.

In September, they’ll have something new to covet: A top-secret Nike collaboration that Fujiwara describes as a “high-end Jordan project,” which was originally intended to debut in time for the Olympics, before the games were postponed. For now, though, it’s still his to enjoy.

“I’m always excited about making stuff,” he says—but release day can’t quite compare to this time, the rich-with-potential period just ahead of the reveal, when samples transform a cool idea into a cool thing—like the Air Jordan 3 prototypes on Fujiwara’s feet, which he nearly takes off so that I can get a good look at the Fragment logo placement on the heel. This moment, when the product is both real and malleable, is, for Fujiwara, “the most exciting time.”

Whatever comes next will probably be the result of some chance encounter or a phone call from an old friend. It could even start out with a tweet from Kanye. Design, after all, is something Fujiwara can do well enough on his own, like when he customizes his favorite Goyard tote bag—the Saint Louis—with the Fragment logo. What he can’t manage by himself is the magic that results from collaboration.

“I never had any philosophy,” he says. “Just me and my friends.”