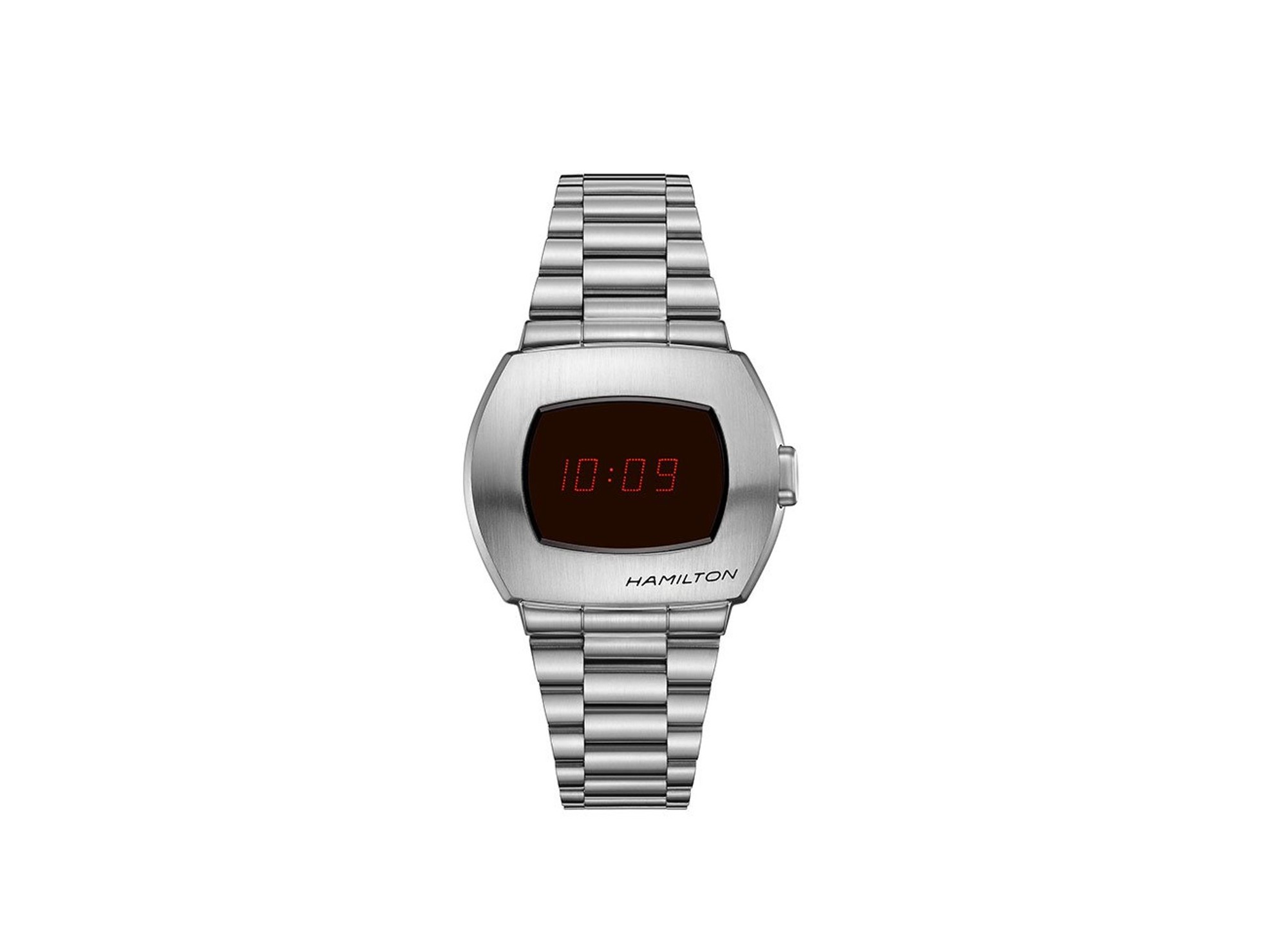 May 6, 1970 stands as one of the most significant moments in wristwatch history. At a press conference in The Four Seasons restaurant in New York City, Hamilton revealed to the world the very first digital electronic wristwatch. Named the Pulsar after the pulsating neutron stars that emit beams of radiation at ultra-precise frequencies, this seemed an object straight out of science fiction, with no moving parts, no ticking sound, and unmatchable durability and accuracy.

But the science was real. This ingenious ‘solid state wrist computer’, developed by Hamilton in its hometown of Lancaster, Pennsylvania, would change the way we tell time.

The public received its first glimpse of the Pulsar prototype on the US TV program The Tonight Show, when host Johnny Carson demonstrated its unique functionality: pushing a button on the side of the watch made the time flash in red LED numerals on the dark screen, while holding the button for longer revealed the passing seconds. The watch could be set via a unique magnetic bar hidden in the bracelet.

The inaugural Hamilton Pulsar, the P1, launched to market in 1972, with an original, space-age design to match its groundbreaking technology. With an avant-garde cushion case and bracelet in 18 ct yellow gold, it was an unmistakably elite product, with a $2,100 price tag that matched the cost of a family car. Elvis Presley was among the pioneers who snapped up one of 400 models.

By the following year, the wrist computer was ready for the general public. The stainless steel Pulsar P2, with a more rounded case design and an improved chip module, launched in 1973, pioneering the nascent market for digital watches. Produced in large volume, it was a colossal success. Among those to wear it were Keith Richards, Joe Frazier, Elton John, Giovanni Agnelli and U.S. President Gerald Ford. It was the epitome of cool.

Thanks to Hamilton, an entire new genre in timekeeping was born.

With the new Hamilton PSR, we’re powering up this icon of 1970s style and technology once more. There are two versions of the PSR to choose from: one in stainless steel, and a version in stainless steel coated with yellow gold PVD that’s limited to 1,970 models. Both watches feature cases in the inimitable wide cushion style of the P2, with the same dimensions of 40.8mm x 34.7mm. The watches are water resistant to 10 bar (100m).

One of the differences with the previous version is the display of time. The Hamilton PSR features a hybrid display mixing reflective LCD (Liquid Crystal Display) and emissive OLED (Organic Light Emitting Diodes) technologies. Pressing the button will once again bring up light red OLED numerals in the familiar ‘digit dot’ style, while the LCD display ensures that time is also permanently visible in daylight conditions. Combining both technologies means that the display has very low energy consumption.

The Hamilton PSR is a timely reminder of where and when the digital world began, and what digital timekeeping once meant. Just as it was then, the PSR remains the epitome of cool and a watch for those wanting to make a statement.