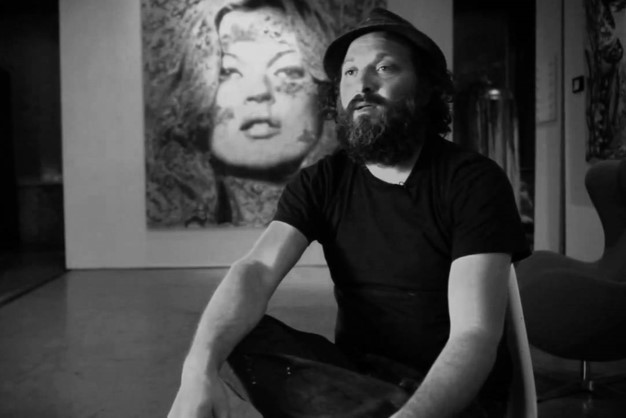 Mr. Brainwash, are you an art piece by Banksy?

What’s an art piece? Maybe I am. If you think about it, why not? I’m real; I am who I am. I’m continuing. What you see now is mine, Banksy has nothing to do with it. I’m here, it’s me. My life is my life; nobody’s going to take that from me. His life is his life. I mean, we have a connection, we have something that connected us for a movie, but life goes on.

Do you introduce yourself as Mr. Brainwash or Thierry Guetta?

Both names are the same – Mr. Brainwash a.k.a. Thierry Guetta. People know me as both names. It’s the same person.

What is the most important thing you’ve learned from Bansky?

If I learned anything from him, it would be passion. You know, two people meet each other and they connect. That’s why there is a movie about it because there was a connection from him to me and me to him. There is this connection that made something.

Were you ever tempted to tell people who he really is? A lot of people are interested in that and would pay a lot of money.

I don’t get bought out. I’m a real person with real trust and that’s how it is. You don’t need to know; it’s not going to make a difference if you know. It’s just going to serve a little problem in your head but it doesn’t make a difference.

How do you feel about Banksy stealing your film?

He didn’t steal my film.

So you let him have it?

No, we were involved together.

But it was your footage that he then turned into a movie.

So? It doesn’t matter. It’s that kind of film; he kind of put it together. It’s teamwork. It’s something that is done. A movie is not done by one person, it’s done with a lot of people. The editor did his work, the filmmaker did his work – it’s a whole thing all together.

Were there moments when you thought that this whole thing would go wrong and not work out?

I didn’t care, you know. I mean I go all the way and whatever happens happens. At least I don’t regret that I didn’t do it.

But there was money involved, right?

There is money involved. But money you can always make back. I think in life a situation cannot happen all the time. You have one moment in life that you decide to do something and you go all the way. I work with a passion and my passion is what drives me into craziness and sometimes craziness makes you do things that you don’t do normally.

“It’s not playing jokes or being funny, it’s to be real and to do whatever you want.”

Has making money changed the way you make art?

No, sometimes art without money is better art. Sometimes you do something better without money so money doesn’t make a difference. Money makes it happen that you can do bigger things. You can fly, you can go anywhere. It’s something that keeps you rolling and keeps you doing what you want to do in life.

But without money you wouldn’t be able to put on the exhibitions you do. You don’t actually make the art pieces yourself, you have people doing them for you, correct?

Not really the art, but some installations that’s for sure. I have a mind that is bigger than what people think. Sometimes I want something that is 20 feet high and it’s a television and I’m not going to be the one putting it together. It would take me the whole show to do it. So hiring some people to have what I have in my mind – it’s whatever it is. I get things done the way that I want it. So it doesn’t matter. Like, somebody who built the Eiffel tower, it’s not the artist who is going to build it. He’s going to have some other people that are going to build it for him and he’s going to be there to see the evolution of it and I guess everything else too. Like building a building, you know? Some people have it in their mind, they design it, and some people help to create it.

Yeah, you know I’m good for me. I don’t know if I’m good for you. Art doesn’t have any way – art is freedom and you can do it any way you want. I can take a bottle and put it on top of this table and say this is art. If I believe it, it’s art for me, and it can be art for other people.

So what is the goal of your art?

What I want to bring to people is something that people can smile at and something that can be funny. It’s not playing jokes or being funny, it’s to be real and to do whatever you want. There are no rules in life, nobody can tell you the rules. You live your life and you’re trying to be the best at it and you’re trying to follow your dream and nobody’s going to stop it.