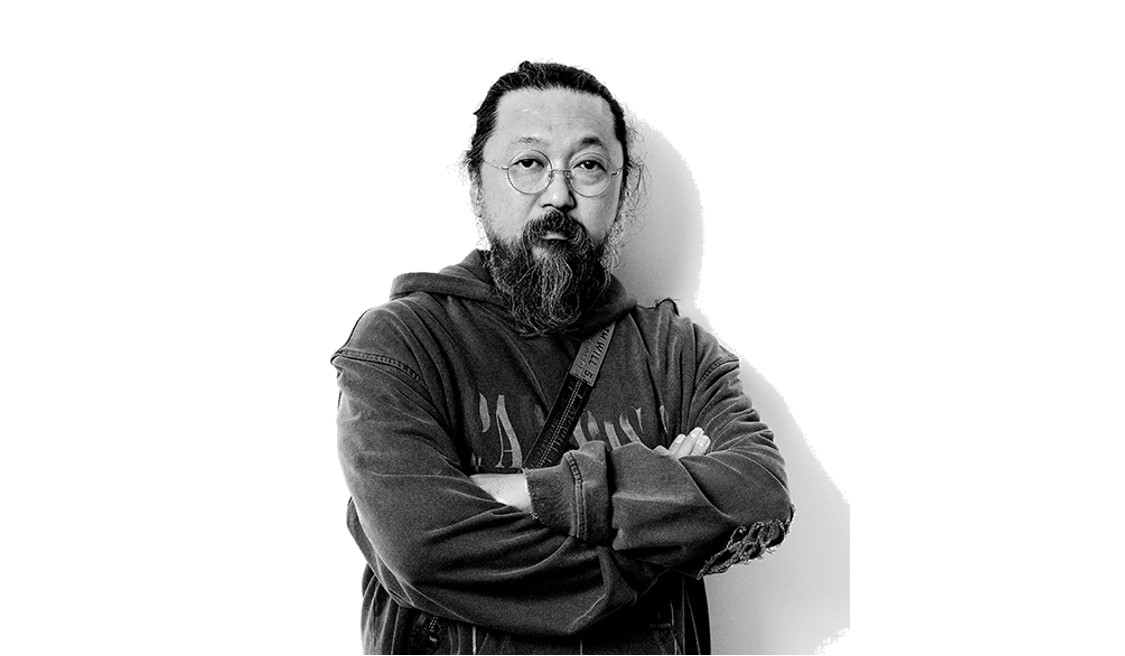 After underperforming in high school, Murakami went to a college of art not to start a career but because he thought it was his only option. And yet he moved on to graduate school and then did a pivotal stint in New York, where he developed the East-meets-West, high-meets-low aesthetic that would make him famous. A darling of the critics who has collaborated with the likes of LVMH, Kanye West, and the Museum of Modern Art, he produces and promotes artwork through his company, Kaikai Kiki. 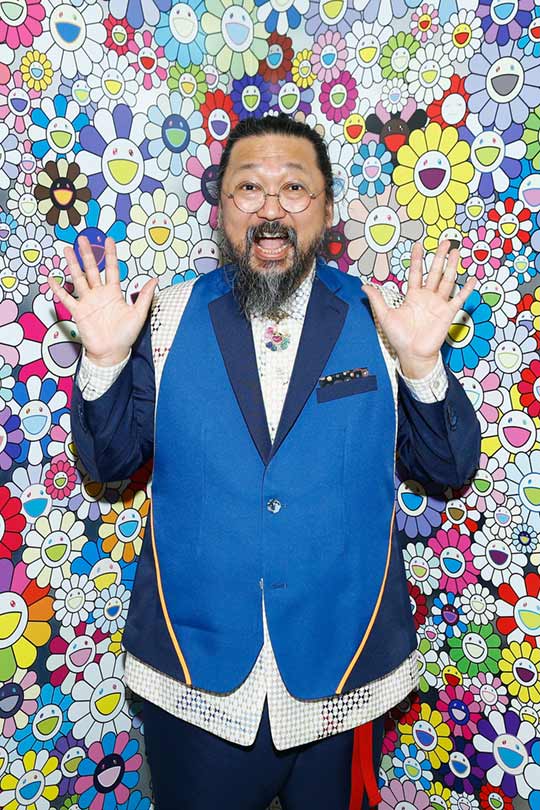 When did you know you wanted to be an artist?

Murakami: I nearly dropped out of high school, but I did want to go to university, so the only option was art school. I started at age 20 after failing the entrance exam twice. I decided to pursue a career as an artist later. I was 26 or so and trying to make animated films with my 8 mm camera but completely unable to do anything good. So I decided to be an artist instead. My family was poor, and I needed a job, so I chose painting.

How did you develop your style?

I went to New York on a one-year Asian Cultural Council grant, and I thought, OK, I have a year to make a gallery debut. I understood that what I’d been doing in Japan wouldn’t work in the American art scene. So I was exploring and looking at three artists in particular: Rirkrit Tiravanija, who is Thai and was doing a gallery show serving curry; Felix Gonzalez-Torres, a Cuban whose expression about being a minority might have come from somewhere pure but looked like a strategy to me; and Bob Flanagan, an American disabled since his youth—and therefore also marginalized—who was doing a museum show. I recognized that I, too, was a minority in New York and would need to use my background. I’m an anime otaku, or “geek.” That became the style I have to this day.

Tell me about your creative process.

When I’m inspired to create, it’s not any profound process. It’s more like I have an antenna and pick up something—a word or image—and do a little memo, scribble, or sketch. After that, because of what must be some sort of mental disability, I forget absolutely everything and go back to my daily routine. When I eventually look through those sketches and memos, I discover all these things I can’t imagine I’ve thought of, and there’s a big surprise. Sometimes I think, Oh, this is so stupid. But I will give maybe 15% or 20% of the ideas to my assistants to create digitally so that they are more concrete and we can look at them. Of those, maybe half will survive as something that I can use, and then my assistants and I try to develop them. There are a lot of those half-baked ideas in the inventory. And then when a project or show is coming up, when we have two months to go and I’m panicking, one of my assistants will pull something out and say, “How about this?” And for me, it’s completely fresh because I again don’t remember anything. So I say, “Oh, this is great.” In that sense, my memory deficiency is what drives my creative process.

Why did you open a studio and gravitate to collaborative work?

When I was in high school, I was fat. I loved the American snack Cheetos, and I would eat five bags a day. I was unpopular—with only one or two real friends. I just played video games in coffee shops. But when I started university, I lost some weight and looked a little more normal. I joined the animation club and really made an effort to become a regular college student. And I ended up somehow with a lot of friends. I was always drinking and hanging out with 30 or 40 people. Before graduation everyone had their own individual projects, and mine was to do a traditional fish painting, where you paint each scale one at a time. But there was no way I was going to finish on time, so, even though I didn’t ask them, three or four of my friends volunteered to help. And when the work was complete, everyone was so happy. That was my first experience working as a collaborative. I then went on to graduate school, and for the dissertation I was again running behind. At the time I happened to be teaching at an entrance-exam prep school for high schoolers trying to get into art universities, and I guess I abused my position by having 20 or so of them spend their summer vacation helping me complete the work for free—though I always fed them fried rice—and just like my college friends, they were excited to do it. I realized that I feel happy not when a work is complete but when I see everyone who participated in it celebrating. And so maybe my path as an individual artist/painter was a vocation, not a passion, and what I really enjoyed were group efforts, where you create something together. From then until age 35, I was gathering people together. I wasn’t making it as an artist, but I was happy. Around age 37 or 38, I started making money and paying everyone. Then I received a letter from the tax office, and an attorney told me I had to form a company and properly pay employee salaries and the taxes on them. So to keep working with a lot of people, I had to build this system. I was watching a video about George Lucas’s movie studio around that time, and I thought, OK. I can do it as well.

How do you pick the people you work with?

Before, it was an organic process. But now we’re doing more-formal hiring, recruiting. Initially, I wasn’t too involved in the selection, and people of varying quality would come in, and we’d have to let some go. That was a problem. But last year, because of the pandemic, we had fewer projects, shows, and collaborations, and I had more time to think about the running of the company. I do feel like I’m aging, and my organization has really ballooned, so I need to start to get things in order and maybe shrink a little.

You seem to get the commercial side of art pretty well, though.

Whether they’re athletes or artists, some people have amazing ability; they can just do it. Others love playing but aren’t geniuses, so they do their best to survive in the field. Maybe they become managers or coaches. I know myself and my ability, and I know that I don’t have any genius. I can only go at this strategically and look at how the game is being played. One of the first gallerists I got involved with was Feature, Inc.’s Hudson. He let me show at his gallery three times in one year, including a solo show, and after the third exhibition, when my work sold for the first time, he took me out to dinner and explained the following in very slow, clear English, so that I could understand. He said, “Today your work sold for the first time, which means that we both benefited, and this is how the relationship between a gallery and an artist is nurtured.” At first I saw gallerists only as dealers who would take a percentage. But I realized then that they get involved in your career and life and finances, and they try to support and educate you. That was the moment that my perception of the art world really shifted. I saw the difference between the real art scene and the one I had left in Japan: It’s a business.

How did the LVMH collaboration get started?

It came about because the artistic director at the time, Marc Jacobs, wanted to work with me. And both the president of Louis Vuitton then, Mr. Yves Carcelle, and the president of Louis Vuitton Japan, Mr. Kyojiro Hata, were very kind with their time and efforts. Now Mr. Carcelle has unfortunately passed away, Mr. Hata has retired, and Marc Jacobs has left, but the long relationship continues. There have been ups and downs, but we’re still collaborating. I’m starting to wonder if maybe it was Mr. Bernard Arnault, the owner of Louis Vuitton, who liked me from the beginning. He has a lot of my artwork and has done shows at the Fondation Louis Vuitton. People think he’s scary, but when I see him he’s very friendly.

Why did you—as a Japanese artist—recently get involved in the social justice movement in the United States?

Usually, with collaborations—like those I’ve done with Kanye and Pharrell [Williams]—I don’t approach anyone. They come to me. But last year when Black Lives Matter was gaining momentum, I wanted to do something, so for the first time I proactively volunteered to make art for the cause. I worked with the mobile video-shopping app NTWRK to auction off six limited-edition prints and donated the proceeds to organizations including BLM, the Equal Justice Initiative, and Color of Change. Over the years I’ve become aware of my work’s popularity with the U.S. Black community. They seem to have a big appreciation for 1990s and 2000s Japanese culture. And now that I’ve been introduced to that audience and learned their culture and history, I better understand where minorities and particularly African Americans are placed in U.S. society. As someone who was conscious of my own outsider status when I came to America, I can empathize. There’s a certain sadness or sorrow or tragedy that’s associated with being in the minority. Maybe the childish, simplistic lightness in my work kind of pushes back on that or balances it.

A version of this article appeared in the March–April 2021 issue of Harvard Business Review.